So, appears my host is having some sort of problems. Their client area(s) have been showing a database error and a maintenance error at least for about a week now, meaning I can’t pay my February bill. Also haven’t gotten the e-mail that there is February bill waiting to be paid, or the usual reminders before the due date (today). So. The other hostees have the same problems. I don’t know what’s going on, and they aren’t communicating. I DM’d them on Twitter a couple of days ago, but no reply.

If my sites disappear/go offline/whatever unexpectedly, it’ll probably be related to this. I hope I won’t need to find a new host because honestly, I’m not sure I’d resurrect any other sites than this one (https://www.so-obsessed.com) and Jeri Ryan. Fingers crossed!!!!

If the worst happens and my sites disappear and I need to find a new host, I’ll be posting status updates to my DW https://intothisshadow.dreamwidth.org and my Tumblr https://intothisshadow.tumblr.com as well as my Pillowfort https://www.pillowfort.social/intothisshadow Be sure to bookmark at least one of these in case you need it later. DW is probably the easiest to find the newest site news post – I can make a sticky post there which will be always the first.

My host has been having some problems recently, but nothing that affected me until now.

You may also notice that all the galleries have a somewhat changed look – I want to have the Coppermine theme I used for the Picard gallery on all of them, but decided to re-use the  header images from the previous theme (because I still like them!) instead of making new ones… so if you can’t quite pinpoint what’s changed on TOS, TNG  etc… that’s why things look a little different but not entirely 🙂

I also switched out the enlargeit plugin for html5 slideshow plugin, which changes how the image is viewed: now when you click on a thumbnail, it’ll take you to the pictures page and shows the full-size image but automatically scaled down to fit the theme. If you save the image, no worries – you’ll get the full-size one! You can go through the album like this, or you can use the slideshow feature which can be started by clicking the button shown here in the screenshot in red: 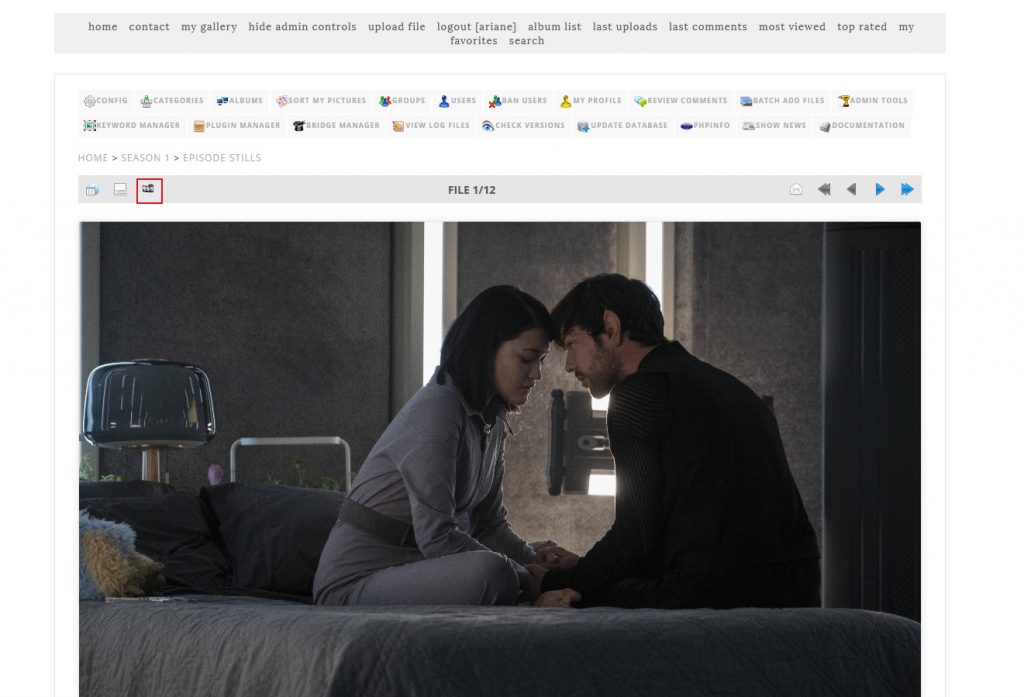 There was an issue with the power supply of the server, and once that was resolved, turned out it had caused a database corruption issues. But everything is now fixed and should be working normally!

There was a problem with comments coding on the other theme, so I activated one where commenting works!

I’ve gotten a few quetions whether I’ll be capping Star Trek: Picard when it’s released. The answer is yes… but that answer is contingent on whether or not I shut down this site.

For the past few years I’ve been wanting to reduce the number of sites I have, and have deleted more than half of them. But I haven’t been able to make a desicion about this one so far – I’m as big a Star Trek fan as ever, and this is one of my most dearest sites. But just capping TOS in full was my original plan, and then TNG because it came out in HD. This is one of the huge sites I have left, and I’m not enjoying/having problems extending the mental energy it takes to keep (especiallybig) sites going because the next server disaster is always just around the corner. Recovering from those can take months.  I have several chronic illnesses and I’m a spoonie and this makes it all even harder. I’ve had times in the last few years I’ve just wanted to wipe this site out of existence and be done with it, but I didn’t because I also kind of hate that thought and know 100% I’d regret it soon after. But I still kinda want to do it all the time. And I’m still hoping for DS9 and VOY in HD on Bluray, and already right now want to cap them in HD, so I’d likely just end-up restarting the site had I deleted it and then those two come on.

Also part of my consideration is Jeri Ryan who is my favorite actress, for whom I have a fansite as well (along with this one, these two sites are my oldest sites now! I started both in 1997.) and who will be appearing on Star Trek: Picard. I’ll be capping her in any case, and I suspect I’ll want to cap the full eps because of that.

So there’s a lot of waffling about going on about the site’s future, and has been for a while.

All images from Star Trek tv series and movies are copyright and trademark of CBS Paramount Studios. This site is for non profit use only and is run by a fan for fans.